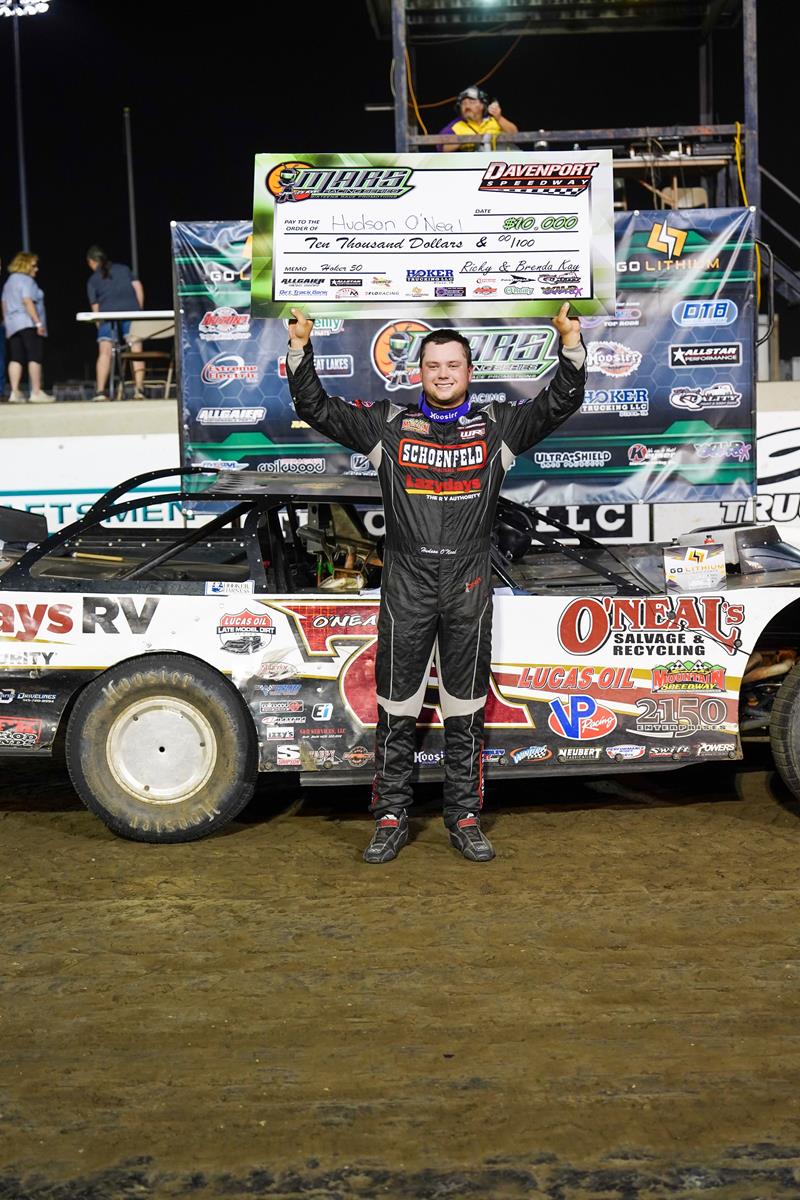 New Deal does it again at Davenport

DAVENPORT, Ia. (July 26, 2022) – The MARS DIRTcar Series invaded Davenport Speedway on Tuesday, to compete in the Hoker 50 for a shot at $10,000. With the top late model drivers in the country on hand, it didn’t take very long for the action to heat up.

Five drivers crushed the track record in qualifying. Devin Moran of Ohio, turned the fastest lap, in a mere 13.333 seconds.

In the main event, the Hoker 50, it was all Hudson O’Neal. The Matinsville, Indiana racer led all 50 laps from the pole, but it was not easy. O’Neal’s victory was his second $10,000 win at Davenport Speedway this month.

Hudson had to fight off the challenges of Mike Marlar, Devin Moran, and Bobby Pierce for the win. Pierce was putting on the pressure in the final fifteen laps. Bobby got to O’Neal’s rear bumper, tried a couple of sliders, but was unable to make the pass for the win. Devin Moran took third ahead of Max Blair. Mike Marlar ran second early in the race, before sliding back to a fifth place finish.

The best local finisher was Justin Kay of Wheatland, Iowa. He started 20th and finished in seventh place.

Matt Werner picked up his third straight Eriksen Chevrolet IMCA Modified feature win. Werner passed Travis Denning on a lap ten restart for the lead and went on to take the victory. Ryan Duhme and Chris Zogg had a dandy battle for third with that spot going to Duhme. Charlie Mohr rounded out the top five.

Jeff Struck Jr. continues to pile up the victories in Koehler Electric Street Stock action. Struck got out to a big lead early, but in the final laps had Rob Henry and Jesse Owen nipping at his rear bumper. Henry would end in second with Owen third. David Brandies and Justin Kay were fourth and fifth respectively.