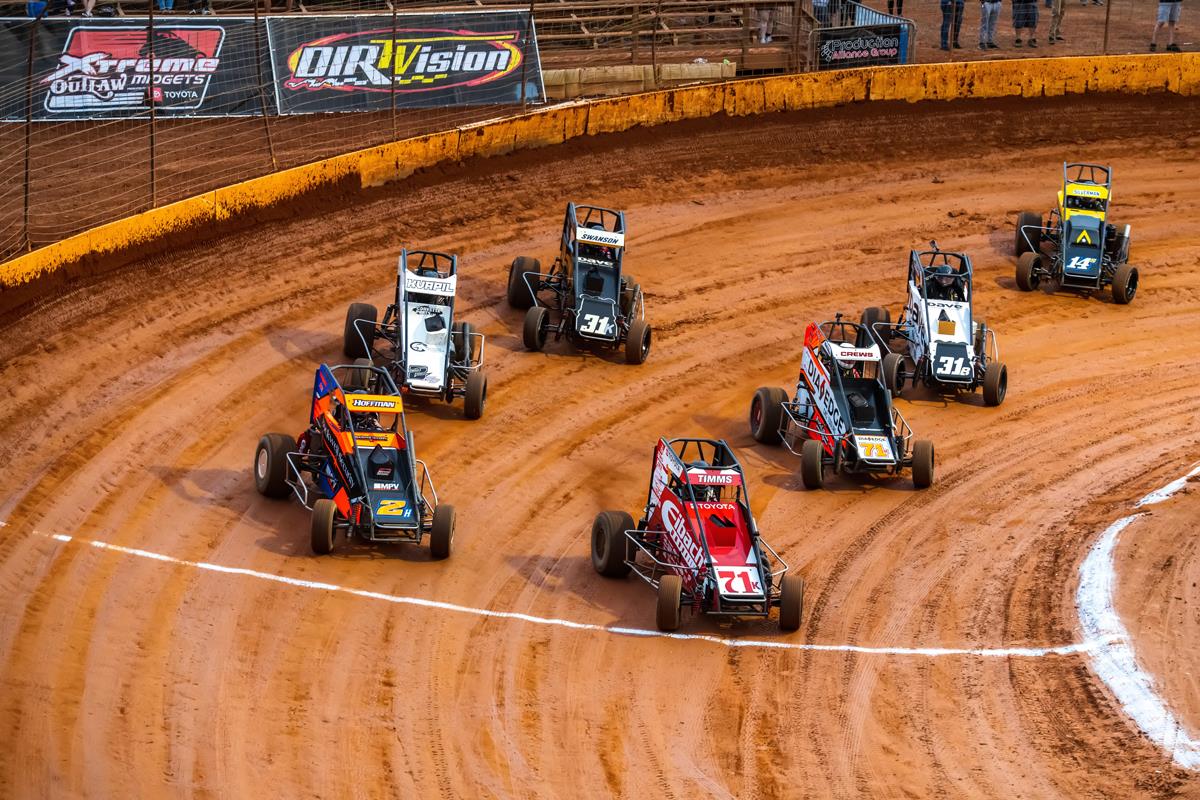 Davenport Speedway in Davenport, IA welcomes the mighty midgets, in conjunction with POWRi, to town this Friday and Saturday, August 26-27, as part of the Quad Cities 150 presented by Hoker Trucking. The doubleheader creates an exciting pairing for race fans with the World of Outlaws CASE Construction Equipment Late Models on the docket at the 1/4-mile venue.

BUY TICKETS HERE (Fri-Sat) https://bit.ly/3cj99Ts
Let's take a look at what to watch for this weekend on DIRTVision.com:

FIVE-FOR-FIVE: The Xtreme Outlaw Midget Series presented by Toyota will again put its incredible parity streak on the line this weekend with the hopes of a sixth and possibly seventh different winner through the inaugural campaign. The most impressive part is arguably how historic each of the five individual wins has been.

Gavan Boschele, 15, of Mooresville, NC, will forever be the first winner in Xtreme Outlaw history thanks to his May 24 win at Millbridge Speedway. Taylor Reimer, 22, of Bixby, OK, followed suit the next night by becoming the first female to win a National Midget race. She was quickly backed up by Jade Avedisian, 15, of Clovis, CA, who dominated Jacksonville Speedway, making them the first back-to-back female dirt winners in a national dirt racing series. Chance Crum, 25, of Snohomish, WA, finally earned his first-career National Midget win earlier this month at I-55, and then Michael Pickens, 39, of Auckland, NZ, used a thrilling last-lap pass to become the first driver to win with USAC, POWRi, and Xtreme Outlaw.

RETURN TO RACING: If all goes according to plan, fans in attendance at Davenport Speedway this weekend will witness an emotional return to racing for 17-year-old Daison Pursley, his family, and Keith Kunz/Curb-Agajanian Motorsports. The Locust Grove, OK native has been sidelined for more than nine months since he sustained a potentially life-altering injury last November while racing in Arizona.

It's been a long road to recovery with rehab, doctors, and specialists all across the country, but the light at the end of the tunnel is beginning to show. Pursley recently dabbled in Micro Sprint racing and quickly found his way back to Victory Lane, and now he's ready to climb back into the National Midget ranks. If approved, he will be back in his Keith Kunz/Curb-Agajanian Motorsports #9 for his debut with the Xtreme Outlaw Midget Series presented by Toyota.

LEADING THE WAY: Through the opening five races, nobody has shown as much consistency as Zach Daum in the Bundy Built Motorsports #9M. The Pocahontas, IL native remains winless with the Xtreme Outlaw Midget Series presented by Toyota, however, he still owns a 60-point advantage with another five nights remaining in the $10,000 championship chase.

Daum, a three-time champion in the POWRi National Midget League, has finished no worse than sixth this season with Xtreme Outlaw He's the only driver with three podium finishes, four top-five results, and five top-10 showings, all coming in his first full season with the Mooresville, NC based operation. Like many, this weekend will be his debut at Iowa's Davenport Speedway as he looks to finally add a win to his 2022 resume.

WAITING IN THE WINGS: Currently behind Daum in the point standings is Brenham Crouch, 16, of Lubbock, TX, Bryant Wiedeman, 17, of Colby, KS, and Kyle Jones, 29, of Kennedale, TX.

Crouch (-60 points) is up to a 7.4 average finish highlighted by a runner-up at Jacksonville aboard his Keith Kunz/Curb-Agajanian Motorsports #97. Wiedeman (-78 points) has rattled off four-straight top-10 finishes in the Keith Kunz/Curb-Agajanian Motorsports #01, peaking in fourth after leading laps at Millbridge. Jones (-136 points) has found more and more speed in the Trifecta Motorsports #7U, scoring a season-best sixth at I-55 after contending for the win.

MOUNCE IS STOUT: After missing the Xtreme Outlaw debut at Millbridge in May, Mounce/Stout Motorsports has shined since following the Series through Jacksonville and I-55 with youngsters Jacob Denney and Chase McDermand behind the wheel. Both drivers have topped Qualifying groups, won Heat Races, and led Feature laps in limited action, proving they're on the cusp of finding Victory Lane.

Denney, 17, of Galloway, OH, has finished no worse than eighth through his three starts with podium efforts of third at Jacksonville and second at I-55 highlighting his short tenure. He already earned his first-career USAC win earlier this summer at Lincoln Park (IN) and now looks to add an Xtreme Outlaw score to his list.

McDermand, 22, of Springfield, IL, has fought his share of bad luck and peaked with a sixth-place finish in his last outing at I-55. The two-time POWRi National Midget League winner will try to beat his teammate to the punch as each chase their first Xtreme Outlaw win this weekend.

MAC IS BACK: With his two-race suspension - DQ from May 25 win at Millbridge - in the rearview mirror, Cannon McIntosh returns to action with the Xtreme Outlaw Midget Series presented by Toyota this weekend. The Bixby, OK native is currently one of the hottest Midget drivers in the world, enjoying a career year with 11 victories to his credit.

The 19-year-old pilot of the Dave Mac Dalby Motorsports, Crescent Gearwrench, Spike/Toyota #08 has thrived in POWRi National Midget League competition, scoring nine wins and 16 top-10 finishes through 17 starts. With Davenport's doubleheader being held in conjunction between Xtreme Outlaw and POWRi, McIntosh will certainly be a threat for the $4,000 paydays both nights.

THIS WEEK AT A GLANCE
Friday & Saturday, August 26-27 at Davenport Speedway in Davenport, IA